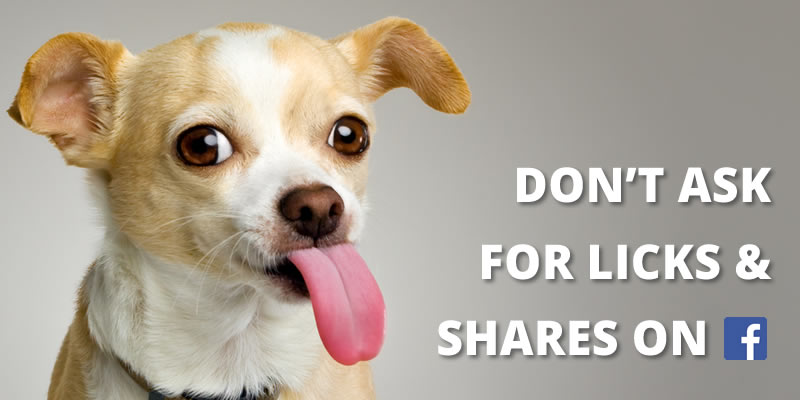 It used to be best practice to ask for ‘likes’ and shares when you posted on Facebook. Not everybody did it, but several studies showed that the simple act of asking your fans to like or share your posts, increased the chances of them doing it. Considerably.

Smart marketers started doing this and the result was that lots of people started sharing and liking stuff that they might otherwise not have shared or liked. Consequently everybody started to see lots of posts, liked or shared by their friends, that really weren’t that great. I’m sure you’ve seen this yourself.

Just like Google, Facebook lives or dies by the quality of the experience it gives users. If everybody’s news feed ends up full of boring, irrelevant rubbish then people will soon stop going there.

Facebook can’t afford to let that happen, so they have changed the rules. Just like Google, Facebook are now engaged in a cat & mouse game with marketers and spammers who find ways to ‘game’ the system. The spammers find a loophole and use it for a while, then Google or Facebook find it and stop it. The spammers find another one and so the dance continues…

On 10th April, Facebook announced a change to the News Feed system “to reduce stories that people frequently tell us are spammy and that they don’t want to see. Many of these stories are published by Pages that deliberately try and game News Feed to get more distribution than they normally would.”

This is precisely the ‘mind-control’ tactic that has been working so well for so many people. It’s clearly not going to work any more! Really though, it is a welcome improvement for all of us.

How exactly will the new system work?

Well they don’t say exactly (if they explain how the system works, it will only help people to find a way around it), but they do say:

“This update will not impact Pages that are genuinely trying to encourage discussion among their fans, and focuses initially on Pages that frequently post explicitly asking for Likes, Comments and Shares.”

My reading of that is it’s OK to occasionally ask people to like, comment, or share, IF it is something of real value, and where it is appropriate. If you do it frequently however, your posts will likely stop appearing in the News Feed at all.

We’ve all seen these — the cute kitten photo or incredible story that is shared first by one person, then another, then another…

It turns people off and Facebook don’t want that.

In the new system Facebook say they will de-emphasise Pages that frequently post these types of items.

These are links that take you off Facebook to a website that is not what the link promised. Usually just a website full of ads when the link suggested you would see a photo album or something. Just plain low-grade spam, which has always been targeted so no major change here, just a clearer statement of the policy.

How does this affect your Page?

Well the first thing to understand is that this is all aimed at spammers who are trying to ‘game’ the system. If you’re not a spammer and you’re not trying to do that then you will be fine.

“The vast majority of publishers on Facebook are not posting feed spam so they should not be negatively impacted by these changes, and, if anything, may see a very small increase in News Feed distribution.”

BUT there are reputable publishers/brands/business out there who are not spammers, but who do use the asking for likes tactic. There was nothing wrong with that in the past, in fact it was considered good practice. Many people running Facebook training courses actually taught that technique and it wasn’t considered spammy, just smart.

Now however, use it with caution.

It can still be used occasionally, and where appropriate but certainly don’t use it all the time.