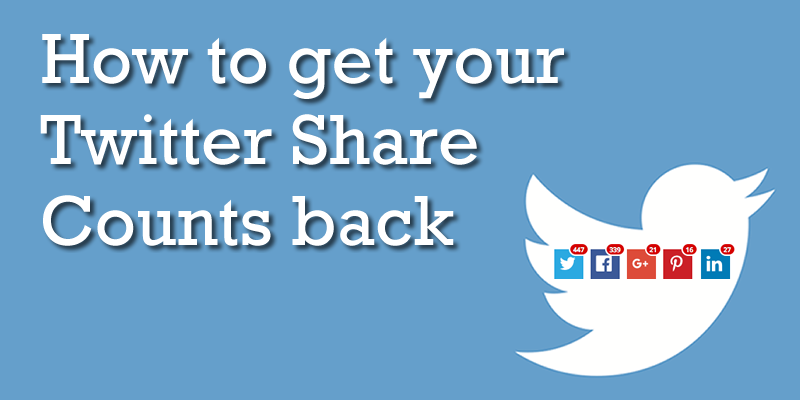 At the end of 2015, Twitter removed the ‘share count’ facility from their API, which meant that your Social Sharing buttons and plugins no longer show how many times your content has been shared on Twitter.

It always was an unsupported feature in the Twitter API, and from Twitter’s point of view, it simply wasn’t worth the effort of maintaining it, so they dropped it.

After all, people want to share content that they know is likely to be well received, and a high share count is a good indication of this, which leads to more shares.

[ctt tweet=”Twitter sharing fell by 11% when the Share Count was removed. Now you can get it back with this free tool… #twitter” coverup=”20D9T”]

It has access to your Twitter sharing stats for the last 7 days, and all your future shares will be recorded from now on.

NewShareCounts works for all the popular Social Sharing tools, including:

Setup is very easy, typically you just have to copy and paste one line of code anywhere onto your web page, and that’s it!

You can currently add up to 1,000 websites, and new shares are usually detected within 60 seconds.

All you have to do is to copy and paste the provided code anywhere on the page and NewShareCounts automatically discovers all standard Twitter buttons on the page, and adds the counter bubble to them.

It really couldn’t be any easier, and it’s free!

For most people, Twitter Share Counts will be restored to their old levels, rather than having to start from zero again. And if you’re showing high Twitter share counts, when your competitors are showing none, you’re naturally going to have an advantage. Because as studies show, content that is already shared a lot, will get more shares than content with less shares.

If you found this article useful, please share it using the buttons below!